Hello Friends,  many of you already know the story of how Casper and Archie came to live with us two years to the day of each other! But because I haven't blogged in so long I will reprint the story again. Are we sitting comfortably?  Then I'll begin...

On February 9, 2008 I went to visit my friend Pauline who rescues cats.  She had told me there was a beautiful white cat (nine months old) that was staying with her and I had to come and see him.  Now Pauline always has cats coming and going from her house so of course I went over to visit, just like I had done on many previous occasions...only this time I fell in love!!  About twenty minutes after I met Casper and was so obviously smitten, Robert looked and me and said "Do you want him?"  Of course I wanted him, but we had no carrier (I held him in my arms), no litter box, no food bowls or kitten food for him.  I said to Robert "We are completely unprepared" and he replied with a smile "Who cares?"

Now, fast forward two years on to February 9, 2010.  Robert and I had just returned from visiting my brother in England and out of the blue he said to me "I think we should get another cat."  Now you must remember after Casper we got Benjamin and before Casper we already had Molly, so we were a three cat family.   He reasoned that cats make me happy so why not get another and because one never knows what life holds, it is silly to put things off.  I happily agreed with his logic so off we went to the shelter.  Young Master Archie (who was not named that at the time) sat quietly at the front of his cage and stole our hearts with his happy little ginger face.

The Gotcha Boys
and they lived happily ever after :-)
Posted by Cat 24 comments:

It is exactly a year now since I moved from Toronto, the city I had lived in all my life and fourth largest in North America, to Cobourg; town of 18,000 people. As you can see not one word has been written here in 2015 and honestly I almost forgot how to put up a post but I wanted any remaining blogging friends that I have to know I am alive and well and living the country life.


Nine months after my fiftieth birthday my husband and I pulled up stakes and moved ourselves along with our beloved five cats and dog to Northumberland County. It was a somewhat unexpected change, we had talked about leaving the city at a time in the future, maybe ten or fifteen years from now but then we found ourselves quite by accident in Cobourg and were charmed by the town...three days later we bought this house!


Our transition here has been seamless and surprisingly easy. However, the day we moved the boys out was not seamless and easy it was stressful and difficult. They had been staying safely at my mum's house during the big part of the move. The day we picked them up was extremely hot and humid and the air conditioning in Robert's SUV had just broken that morning. So if you can imagine five tense and overheated cats in carriers all panting, meowing, and (uncharacteristically) growling for an hour, it was without a doubt the most stressful component of the entire move.


Upon arrival, I took them immediately up to our bedroom, put a litter box in our ensuite (temporarily), opened all the closet doors and released them from their carriers. They bolted or slunk under the bed and into the closets, I stayed for a little while talking calmly to them but eventually left when nobody seemed to be listening to me.  I said to my husband "they are shaken, I'm thinking this will be a long transition!" Then about half an hour later I noticed their little faces started appearing at the door.  No longer frightened but indignant they had been locked in. 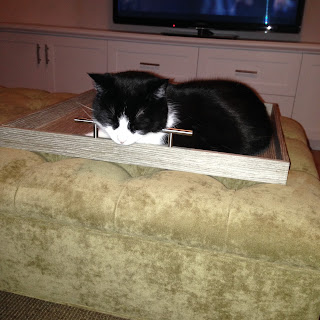 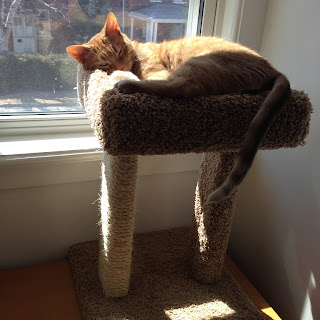 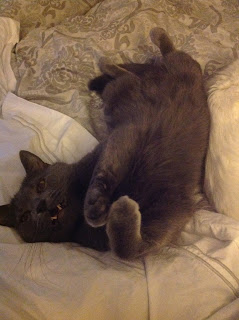 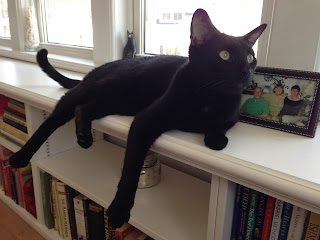 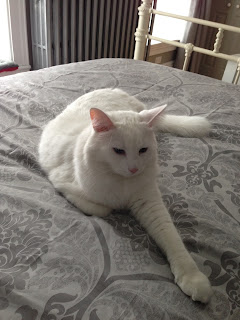 I was amazed and even considered making them stay in the bedroom for a while but once they were no longer hiding and sitting at the door it seemed a silly idea.  So I let them out to explore the house as they liked. It took them all of a day to acclimate and as you can see from the photos, they have been relaxed and happy here ever since. The dog of course adapts anywhere but as we all know cats can be a little trickier, it was a huge relief for us that the boys did so well in such a short time!

Well there you have it folks, a little update on my furry family....hopefully better late than never :-)

I have been away from blogging for quite sometime and Blogger has changed a bit in my absence.  Today I seem to have inadvertently deleted my "About Me" button/gadget from my sidebar and I can't get it back.  I can't even add a gadget/field anymore...any suggestions from my more practiced blogger friends?

The boys are very angry with me that I have messed with their blog. 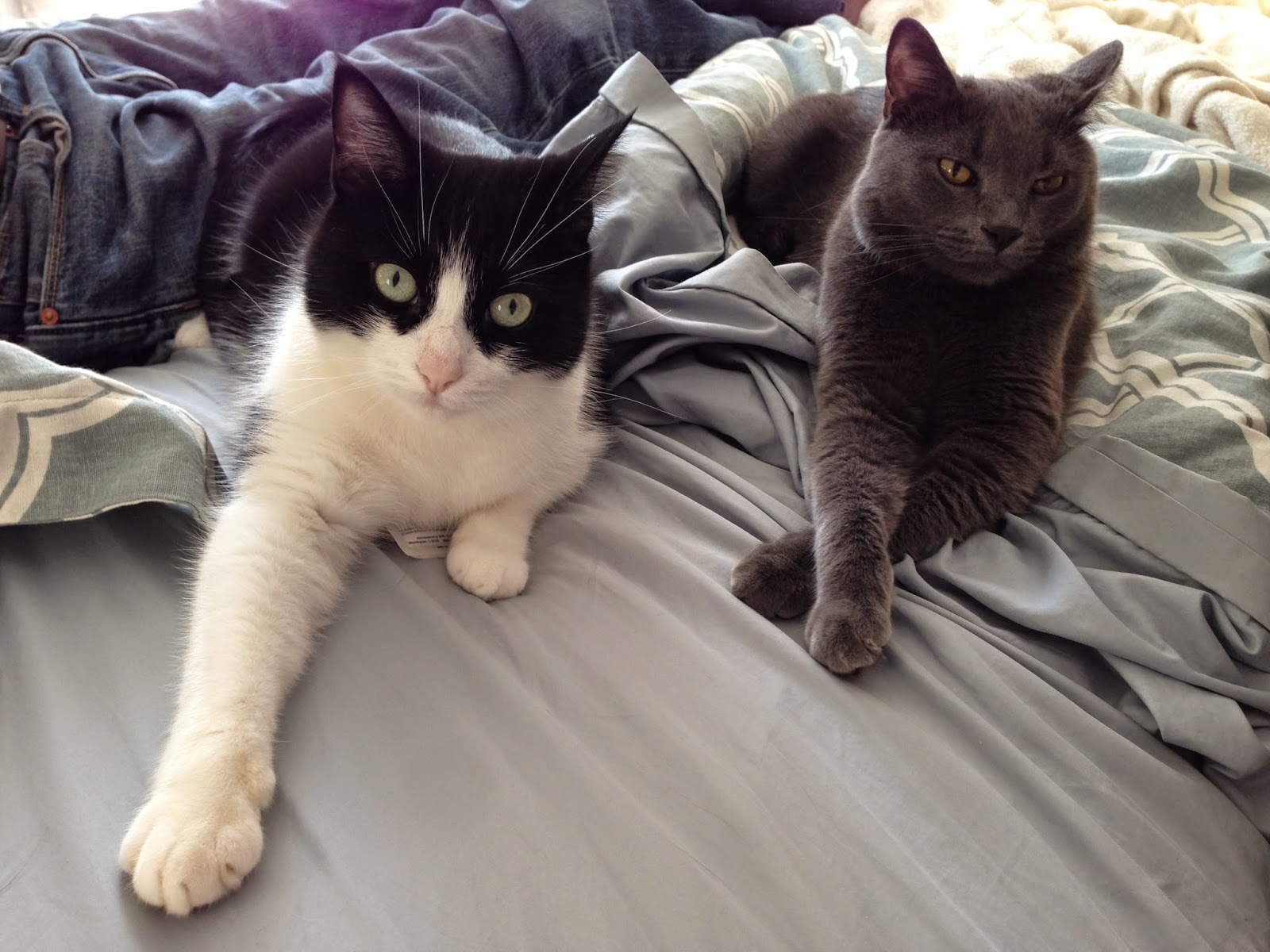 Here's Ben giving me the accusatory paw and Jimmy looking unimpressed with my ineptitude - LOL!

I attempted to post this video on my facebook page but sadly only the audio came through.  I thought I'd try it on the blog and see if I fared any better.  Here is Casper enjoying a nice massage on his furs from the vacuum :-)


Please be so kind to tell me if you can see it.  Thank you!
Posted by Cat 32 comments:

Ben's Gotcha Day and other news

Hello friends, it's been a while between posts again because things have been very hectic here at Cat's Cats.  Robert slipped on the ice at the end of January and broke his leg in two places, this required surgery for a titanium rod to be inserted into the bone.  He was in the hospital for five days then home for two weeks and quite unable to do things for himself.  He is much better now thank goodness, zooming around on crutches and back at work :-)

During that time we missed Casper and Archie's Gotcha Day on February 9, (2008 and 2010 respectively).  Lots of dear friends remembered but had to go all the way back to January 22 to find a post to leave their comments!  Thank you so very much.

Then today I look at the calendar and realize that it is Ben's Gotcha Day already (2009)!!!!  I am so very lucky to have these delightful cats who enrich my life every day.  It's hard to believe that the years pass so swiftly, it seems only yesterday they were wee.


Thanks for popping by, love to all!
Cat and the cats xx
Posted by Cat 52 comments:

Archie's special ladycat is the beautiful and talented Neytiri from Clooney's Num Num Fund and she made him a this wonderful Valentine.  Archie considers himself the luckiest mancat in the Blogosphere!!! 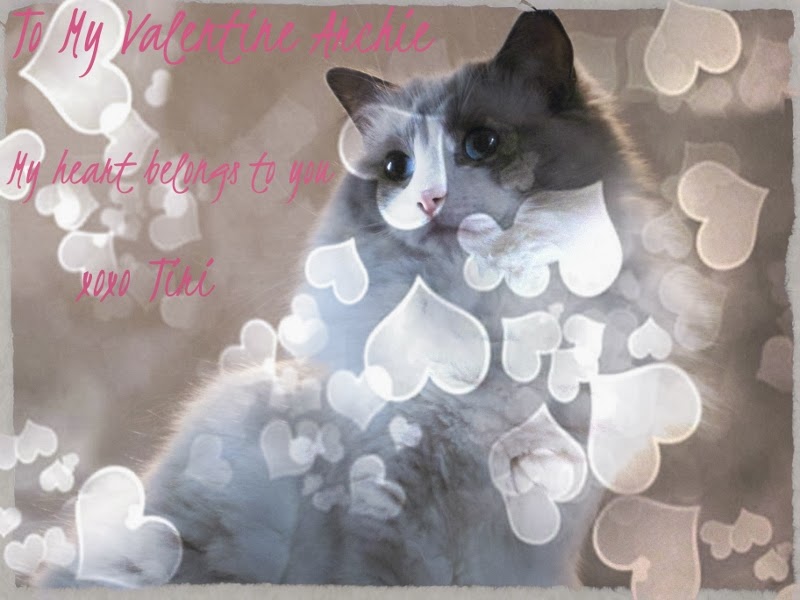 I would like to wish all cats, kittens and their peeps a very happy Valentine's day filled with lots of love!!!! 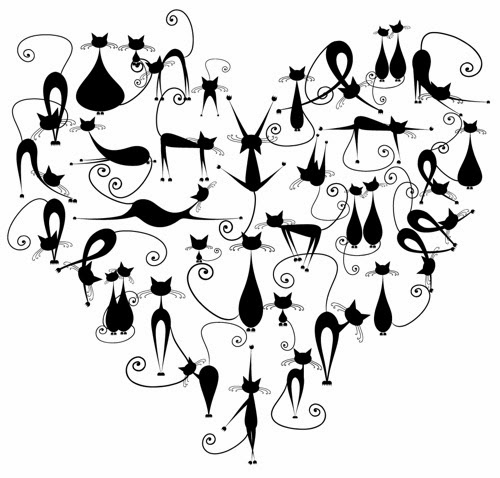 Btw, comments are off today so you can spend more time snuggling with your sweethearts  :-)
Posted by Cat