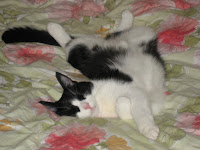 This is Benjamin, aka Ben, Benny, Benners, as you can see he is also a very relaxed boy. When we first adopted him we called him wee Ben, then he grew into Big Ben, but now we call him Gentle Ben. He has matured into a wonderful fellow with a great personality. I gather he is what is called a tuxedo cat because of his formal looking black and white coat. He is a short hair cat, but his fur is very thick and silky soft. He has beautiful green eyes and the longest whiskers I have ever seen. Ben is a world class cuddler. If we are watching a movie he will jump onto the blanket with me, throw himself onto his back and start kneading, purring AND drooling. He will do this for quite a while, sometimes an hour or more before he conks out for a snooze. I guess he left his mother too early and this is a throw back to some kind of newborn behaviour. I love it that he sees me as his mum now and mimics that action with me.

Ben LOVES scrunchie balls and will play with them for hours. When I want to find out where he is in the house I just pick up one of these small balls and give it a squeeze and when he hears the scrunch sound he comes running immediately. Conversely if Ben is lying on me and I need him to get off (usually because I have to pee) but don’t have the heart to put him off because he looks so content, I will ask Robert to scrunch in the other room and he will fly like a bullet after the sound. Casper doesn’t really bother with the balls, I imagine because he can’t hear the crinkling noise they make. Recently Ben has had to share his scrunch balls with our newcomer Archie and he does so happily. He is very protective of Archie; he cuddles with him and follows him around the house as though he is the babysitter. However the other morning I think he was a bit fed up. All the cats love to hang out in the bathroom with us when we are getting ready for work and mornings are very crowded in there! Ben brought a scrunch ball upstairs to play with while I was in the shower. When he dropped the ball onto the bathmat he paused for a moment, probably savoring the thought of how he was going to bunny-kick it into submission, and in that instant Archie jumped off his perch on the counter, scooped it out from under Ben and ran away down the hall with it in his mouth. The dejected look on Ben’s face was so priceless we couldn’t help but laugh. We are so lucky to have this amiable cat, he didn’t run after Archie or try to get the ball back, he just sat down on the mat and I swear I saw him sigh. Casper was a patient big brother to Ben when he was a kitten, and now Ben has become the benevolent big brother to Archie.
Posted by Cat

Email ThisBlogThis!Share to TwitterShare to FacebookShare to Pinterest
Labels: Ben

Awwww ... Ben is gorjuss! Wot a lovely sweet natured boy to share his most favourite toy in the whole werld!