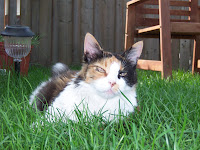 Molly aka Molls, Miss Molly, Molotov Cocktail, Mollone, Molly Jones, Molovski the Russian Wonder Kitty. It amazes me to think that Molly has been with me in my 20’s, 30’s and 40’s. Our relationship is long and devoted on both sides, and she knows all of my secrets. When I took her home from the OSPCA 18 years ago, her kittens had already been adopted but she remained there for several months. The shelter staff warned me that she did not get on well with other cats. Furthermore, when they let the cats out in the evenings after closing time, she would have to stay in her cage. Only when the other cats were safely back in their cages, could Molly be released for her turn to stretch her legs. Her start in life had been rough, a litter at six months of age and then three months waiting at the shelter; she was carrying some baggage to be sure! I didn’t care, she was so beautiful. Her fur was a velveteen patchwork of black, white and orange and she had the loudest purr. Everyone who strokes her says she is the softest they have ever felt.

I did not know about the reputation Calico’s had until my first vet visit with Molly. I hadn’t yet purchased a proper carry case and was still using the one the shelter had given me. Sort of like a giant Timbit box, it was made from strong cardboard and had sides that folded up to make a handle. When I took her for her first check up post-adoption, I opened the box and she sat up popping her head through the top. I’ll admit I was somewhat disconcerted when the vet (who sees loads of cats each day) took a big step backward and clasping her hands to her chest said “Oh, it’s a calico”! She explained to me that only females are Calicos and that they are usually, um, how I say this tactfully… bitchy. Well, that certainly is Molly. You can be stoking her and she is blissfully purring one minute, then she is trying to bite you and hissing the next! I have always accepted her this way because I feel it is hard enough to get people to do what you want them to, let alone an animal. But not everybody thinks like that; Robert was appalled the first time he met Molly (when she was about eleven) and she bit him. Very bad manners indeed, especially since he would become her adoring stepfather. He always says if we break-up he gets to keep Molly.

In all fairness, I must say she has mellowed considerably in her later years. Now she is a complete and total cuddle bunny who has forgotten most of her baggage (kitty Alzheimer’s?). She will gratefully accept all the strokes and loving you have to give, UNLESS you try to touch her toes. I don’t know why this quirk persists, but she goes bats if you mess with her feet. For the most part though she is docile and affectionate. Robert thinks it is because she knows she is old and frail and now must rely on the big cats (us) for survival…not that she ever went outside to bag her own meal! All my cats stay inside because when I was young, all (or most) of my cats got hit by cars. Only Molly is allowed outside in the back garden during summer because she is too old and arthritic to jump the fence. One of us is always with her and she just usually ambles around sniffing things then settles in the sun for a snooze.

Molly developed hyperthyroidism a couple of years ago. This has caused weight loss and some significant damage to her kidneys. At her top end, she weighed in at about 15lbs (yes I had a fat child) but now she is lucky if she tips 5lbs. She feels hollow like a bird when you pick her up, even our six month old kitten is heavier than she is. She used to look like a balloon with legs but now only her fluffy coat camouflages her emaciated frame. The vet told me that her kidneys were only one third functioning and she probably just had a couple of years left. Well that deadline has come and gone and she is still with us and quite vital if a little shaky on her feet. She is now on borrowed time, so we enjoy every day that she has knowing there will probably be some tough decisions ahead. I hope in my heart of hearts that when her time comes she will just fall asleep peacefully in her donut and drift away. I do not want to have some big trauma at the vet where she is scared and suffering. I have never in my life had a cat live this long before so it is new territory for me…
Posted by Cat

Email ThisBlogThis!Share to TwitterShare to FacebookShare to Pinterest
Labels: Molly

Molly's story is sad and heartwarming too. We are sending her BIG rumbly purrs and hope she has a wonderful quality life for as long as pawsible.

Oh I love Molly's story. I too have heard rumors about how calico's are not very nice. Its nice to see that in the end she was a peaceful kitty.
You were a good mommy to Molly. She was very lucky to have you.