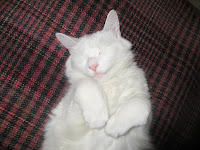 This is Casper aka Prince Casper, Casp, Casperator, Casperitis, Snow Cat, Polar Cat. I don’t even know how to start to describe Casper, he is such a great guy. Technically I suppose he is a special needs cat because he is deaf, but aside from the fact he has a bizarre meow, and we can sneak out of the room without him waking up, he is like any other cat. We got Casper when he was nine months old, still a kitten and a bit hyper he has grown into such a mellow, friendly, fella. I guess because he is deaf, he is just so relaxed! No loud noises scare him and he sleeps like a rock. Casper has welcomed every cat we have put in front of him with open paws. A patient and tolerant older brother he endures kitten antics with love. He is a prince in every way! The other boys take their cues from him so therefore intentionally or unintentionally he sets a very calm tone around the house: if Casper isn’t bothered by it then neither are they. I think I have the only cats I know who aren’t scared of the vacuum cleaner.

He is incredibly good-looking too. With his ice blue eyes, glossy coat, pink ears and nose he cuts quite a dashing figure. His paws are like gigantic snowshoes with great tufts of fur sticking out from between the pads. He is a big boy, 12lbs of solid muscle and dense white fur like a polar bear. He trains relentlessly for the Olympic sleeping team and I could stare at him for hours while he snoozes, usually on his back with all fours in the air completely blissed out and beautiful. He is so good natured and loves company. I don’t mean our company (although I’m sure he likes us), but real company as in guests to the house. When we entertain friends or family, Casper is the life of the party. He stands in the middle of the living room looking up at everyone, his big bushy tail a-quiver and doing happy paws. Nobody has to be stroking him, he just stands there kneading the floor because he is so happy that people have come over! He will visit each guest individually, spending a few minutes mingling before moving on to the next person. He is very equitable and always careful to spread the love around so nobody is left out.
Posted by Cat

Email ThisBlogThis!Share to TwitterShare to FacebookShare to Pinterest
Labels: Casper

Casper sounds like a really beautiful boy. We are glad his special needs didn't put you off adopting him.