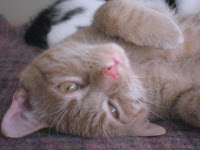 Last but not least, I give you Archie, aka Ginger Snap, Peaches, Georgia Peach, Little Man. According to a website of Scottish names and their meanings, Archibald/Archie means bold one or brave warrior, well wow that is fitting! He is unlike any kitten I have ever met – completely fearless. Archie is not a relaxed cat, he is a coiled spring, a bundle of kitten energy and does everything at maximum velocity. His metabolism must be working at break-neck speed because he is an eating and pooping machine! He tears through the house on his lanky limbs that don’t seem to bend yet and is already faster than his older brothers. Casper has always been very loud on his paws (probably because he can’t hear himself), and Archie, who isn’t at all a springy, shock-absorption kind of stealth cat, is equally noisy on the hardwood. When the two of them run around the house it is deafening and I have taken to calling them “thunder cats”.

Wherever we are, Archie magically appears, sticking his fantastic peach nose (AND he has peach pads too) into every activity that is happening, even if that is bathing! He loves water and regularly gets in the shower to play with drips. It is a struggle to relax in the bath and keep him out of the water at the same time. He has fallen in a couple of times but it doesn’t seem to bother him so much that he stops doing it.

I’m not certain of Archie’s beginnings other than he was a stray and found on the street. Strangely, I don’t think he knows how to snuggle, maybe his mum didn’t have a chance to show him. He is very affectionate and I think he wants to cuddle but he just isn’t sure how to go about it. He will purr and walk around me, head butt me, DEMAND strokes, stand on my chest, but he will not settle into the crook of my arm or snuggle into my lap. I have tried gently pushing his “tocks” (buttocks) down so he understands what he is supposed to do but it doesn’t stay down! He just continues to walk back and forth across me. I’m hoping as he gets older the other cats will show him how it’s done. I’m also hoping as he gets older he will grow some hair! Currently he is like a marine with a buzz cut. He’s not just a DSH, he’s a DSSH: domestic super-short hair. I have never had a cat with such a sparse coat, its really more fuzz than fur and even though he doesn’t have much, he sheds. The other day he was walking around on my lap and left many hairs on my black trousers. I was a little distressed, not because of the cat hair which is my constant clothing accessory, but because I didn’t think he had any to spare. I wonder if he has some Rex or Hairless genes in his make up. I’m thinking about investigating kitty Rogaine if his nutritious diet of pediatric food from the vet doesn’t help to fill him out a little. We’ve only had him for four weeks though, so I guess I’ll have to give him a little more time.

I’m amazed how well he has fit in with the others in such a short time. When we first brought him home he spent a week quarantined in our guest bedroom recovering from a cold before he was introduced to the other cats. From the moment we opened the bedroom door it was like he stepped out and said “Ta-da here I am, well worth the wait wouldn’t you agree?” Then he marched down the stairs and left the other cats in his dust looking bewildered. Ben was a little wary at first but when he saw that Casper was not in the least bit anxious, he relaxed too and set about investigating this new arrival. They accepted him at once and it warms my heart to see all the boys playing together or sleeping piled together on the bed, content in the afternoon sun.
Posted by Cat

Email ThisBlogThis!Share to TwitterShare to FacebookShare to Pinterest
Labels: Archie

Archie sounds very like our Alfie. Alfie is the most loving of cats but doesn't like lap time or cuddling. He too wants affection but was never taught when he was little (he was ferral born in a field then rescued by Cats protection when he was about 8 weeks old). Alfie too is full of energy and zooms everywhere.
We larfed at the thought of Archie saying, “Ta-da here I am, well worth the wait wouldn’t you agree?” # he certainly is a gorjuss ginger!