Every day when I arrive home from work, the same scenario plays out. I come in through the sunroom at the back of the house because our driveway is off a lane way at the bottom of our garden. I must be careful when unlocking the door; Ben will be waiting on the other side. It is necessary to push the door open very gently because he is usually standing on his hind legs, straddling the door and the wall with a paw on each. When I crack the door, his pink nose pokes through the space and he peers up at me. He will stand like that for a few seconds, verifying that it is actually his mum, then I'll give the door a nudge and he will back away and go down on all fours. Next, he'll move on to the small rug that is in front of the door to the kitchen and flop on his side, then stretching, purring and air-kneading will ensue. I'll set my bag on the chair, take off my shoes and bend down or sit on the floor for some Ben/Mum bonding. I scratch under his chin and he rolls onto his back for tummy rubs. The sun streams through the windows and his ebony fur warms and glistens. He blinks and smiles while I tell him how beautiful he is and how much his Mummy loves him. It is one of the finest moments of my day, I hope Ben's too.
Posted by Cat 1 comment: 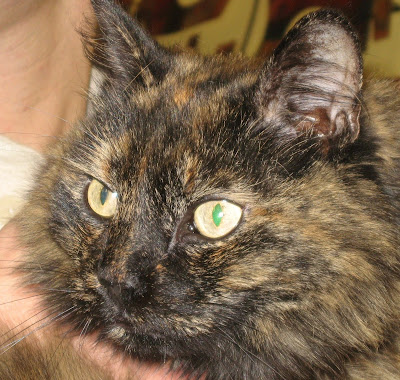 This edition of Whisker Wednesday has an international flavour and features a guest starring appearance by Fifi from across the pond. She is the cat of my brother and sister-in-law and is a fluffy, friendly girl who lives in London Town. Also known as "Fifi of the Orange Toe", as I recently dubbed her, she is a terrific Tortie!
Posted by Cat No comments:

Molly in the Bedroom

I’m fairly certain that Molly would have preferred to live out her twilight years in tranquil solitude. She has not forgiven me for bringing Casper into the house, and reminds me of this every time she sees him. She is just too old to accept anyone new, and she is still carrying a hate-on for other cats from her early days. The shelter warned me all those years ago that she must be an only child, and boy were they right. We tried for about nine months to integrate Casper and Molly using all the proper techniques, but to no avail. Casper, ever the gentleman, took numerous beatings from Molly and never raised a paw to her. He also suffered through her hissing, swearing and derogatory comments in the hopes they would become friends in the long run, but it was not in the cards. Much to his dismay, our attempts to assimilate the crazy calico and his mellow moggie self ended after Molly bit me badly while in a blind rage during one of their supervised encounters. I know she didn’t mean to hurt me, but she was panicking and I tried to soothe her by putting my hand on her back. Casper was in front of her and she probably thought there was some danger coming at her from behind so she lashed out and bit my hand, hard. As I left the after hours clinic on my way to the pharmacy to fill the prescription for TWO kinds of antibiotics, I looked at my throbbing, bandaged hand and said to Robert “no more”. It was just too hard on everybody, Molly was terrified, Casper was confused and now I was injured. We had given it an earnest effort and it just didn’t work. After the hand episode Molly went happily to live in our master bedroom alone, and Casper roamed the house alone. Her food, litter and toys are all in our bedroom, which may not be the ideal situation but as Robert says “you do what you have to”. I mean really, she's almost nineteen with 1/3 functioning kidneys, how much longer could she have...five years tops?

Casper has been introduced to three different cats since operation “meet Molly” failed. Each time I waited for the fur to fly and each time he welcomed another kitty into his warm embrace. Not one single hiss, growl, or snarky remark emanated from him, only loving acceptance and friendship. He took each newcomer under his wing and showed him the ropes. He really is our Goodwill Ambassador and almost solely responsible for the harmonious atmosphere amongst the boys. I thank my lucky stars everyday for Casper; our gentle giant.

Don't feel bad for Molly, she loves her bedroom oasis. Every single one of the boys has strayed into her territory at some point where they were summarily dressed down and informed in no uncertain terms that they were not welcome. She is a formidable old dame who "wants to be alone", and the boys have learned not to mess with her!
Posted by Cat No comments: 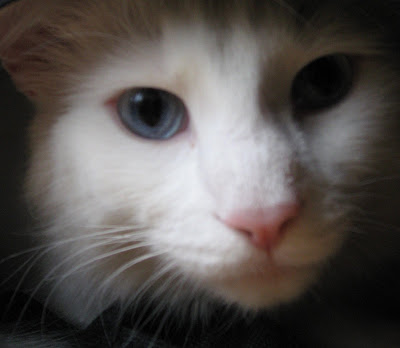 All of my cats have pink noses, I think of them as the Pink Nose Brigade (PNB). Archie’s nose may technically be peach, but that is close enough for what I’m trying to illustrate here. I have been a pink person all my life (when I was a little girl I would only wear pink trousers) and it has become my signature colour. I like everything in pink; I have a pink day-timer, pink calling cards, pink scarves, pink purses and shoes, a pink cell phone, I even have pink courtesy lights in my car.

It has started to dawn on me (duh) that I am unconsciously drawn to cats with pink noses. I wonder how many cat’s cages I have passed by at the shelter because something about them just didn’t feel right. Now I’m thinking perhaps it was because they had brown noses. I’m worried that I have unwittingly indulged in some kind of cat discrimination and a perfectly wonderful kitty may have been left behind because of his nose colour! As a person who has always thought that all cats are beautiful and have something wonderful to bring into our lives, I am quite distressed at the realization that I could have some kind of prejudice against cats that are non-pinks!

But then I think about Max, a very special kitten we adopted last year. He was totally gray from head to toe, complete with GRAY NOSE! He also had gray whiskers, gray pads, even gray gums and was the most amazing cat I have ever known. Within ten seconds of meeting Max I turned to Robert and said “this is the cat for us”.

I’m hoping that Max redeems me somewhat and demonstrates that the pink noses are just a coincidence….anyway Archie’s IS peach! 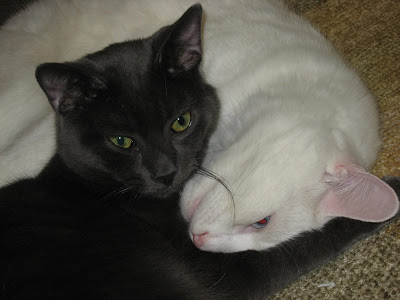 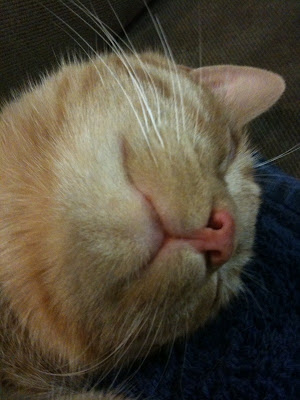 We all talk to our cats, but the question is do they listen to us? I think they do but as is the case with humans, some are better listeners than others.

Molly is the best listener of my bunch, she knows and responds to her name (usually with a murp, chirp or coo) and seems to concentrate intently when I am speaking. She usually stands on me and looks directly into my eyes when I am telling her things so how could she not be listening I wonder.

Casper is immediately off the hook in this debate because he is deaf. He neither comes when he is called nor does he appear to understand when I talk to him. He does however respond to one hand signal and when he looks up at me and meows I look back at him and open my mouth as if I am meowing too. He seems to nod and then move on as if some message has passed between us although I’m not certain what it is.

I have said before that as the alpha cat Casper sets the tone around the house. This is usually a positive thing but in this case Ben and Archie see that he doesn’t respond to my voice so they don’t either and basically just ignore me. I have always had cats who came when they were called so I find this behaviour frustrating.

Ben is one and a half years old and I really think he should know his name by now. He does look at me when I am talking and I hope he knows I’m saying I love him and that he is such a good boy, but alas I see no understanding behind his big, soulful eyes. Archie I fear has ADD and even if he did understand me he has no patience to listen to what I’m saying. He gets distracted so easily and is always rushing headlong from one thing to another, that I don’t think he has ever looked me in the eyes.

So it would seem that my boys are either deaf, dense or disinterested and therefore, in the memorable words of Paul Newman from the movie Cool Hand Luke, “What we’ve got here is a failure to communicate”!
Posted by Cat 1 comment: