I hope I'm not violating any copyright laws here, but my friend Pauline sent me this video and it is too hilarious and timely not to share.  I have no idea whose cat this is but he is fantastic and I love his Easter bonnet.

Enjoy the video, and I wish everyone a Happy Easter!


PS - I've never uploaded a video before so I sure hope it works :-)
Posted by Cat 32 comments:

This week our friend Fin has been showcasing the bloodcurdling things that go on over at  Housecat Confidential.  We thought we'd join in the fun and post our own edition of House of Horrors, so may I present:

THE CREATURE FROM THE BLACK LAGOON!!! 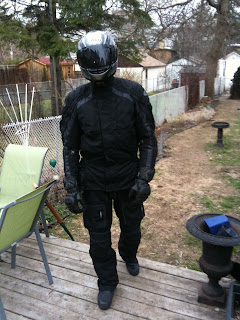 When the weather is nice, Robert rides his motorbike to work.  He wears full gear; jacket, pants, boots and helmet.  If the cats catch a glimpse of him through the back window coming in from the laneway, they freak out as if he is some kind of monster.... 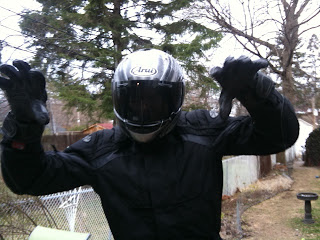 In all honesty he doesn't usually outstretch his arms in such a menacing fashion...that was just for effect.  Tee, hee :-)
Posted by Cat 28 comments:

Today kitties it is with a heavy heart that I tell you our friend Lewis ran off to the bridge VERY unexpectedly.  Lewis just turned four last month on March 17 and understandably his family is shocked and grief stricken. Please pop over to Critters in the Cottage and leave some words of comfort.  Thank you. 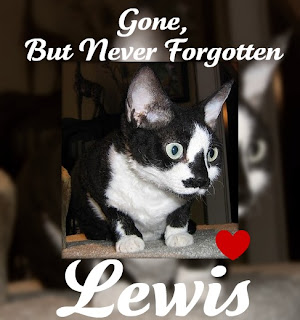 When you are sorrowful
look into your heart
and you shall see that
you are weeping
for that which has been
your delight
~ Kahlil Gibran
Posted by Cat 25 comments:

WARNING:  Gratuitous tummy shots. Not suitable viewing for those who are prone to fainting or cuteness overload!

As most of you already know the lovely and talented Michico made a beautiful portrait of my boys a little while ago which I also use as my header.  Well, the framer finally finished and now it is home and hung and looking fantastic!!!
Of course Ben had to investigate the moment I unwrapped it.
He thought his likeness was uncanny and showed me so

Hi kitties, we got a zoom groom last weekend and the cats are crazy for it!
Now I should mention that Casper has always loved to be brushed and Furminator-ed, Ben was less enthusiastic but tolerated it and Archie and Jimmy....NO WAY!
But, since we got the zoom groom, everyone is lining up for a turn including Archie and Jimmy who seem to love it!!!
Little Jimmy wants to be zoomed too which makes me happy because I couldn't get near him with the brush! 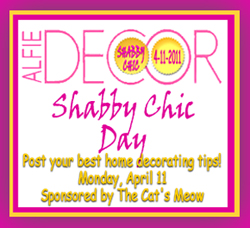 Our friends Alfie and Milo are hosting Shabby Chic Day and we thought we'd join in the fun.  Although there are many fine examples around the house of my boy's decorating flair e.g. nose prints on windows, clawed screens, chewed blinds and paw prints on the glass coffee table, Ben has progressed far beyond the others honing his skills and I think you will agree that nothing tops this.....

This is our living room sofa and Ben has had a field day scratching which makes me very cross!  You will notice the elegant tape that has been applied in an attempt to curb his decorating efforts.  The tape does help, the only problem is I have to take it off every time people come over and then reapply after they have gone.  It's a bit of a pain in the neck.
I know all of you wish your sofas looked this good.  Thanks Ben!
Posted by Cat 32 comments:

Earlier this week, our friends at the Katnip Lounge all played a new game.  It was the brainchild of their mumkat Trish who took an ordinary toy and made a brilliant modification.

We've all seen this box with holes that usually has crinkle or nip balls inside and the cats must figure out how to remove them.  Well instead of balls, Trish put treats inside!  Since we have the same toy at home, that the boys have long lost interest in, we thought we would give it a try too.

Let me tell you cats and kittens there was big drama at our house yesterday.  ALL the cats went to the V-E-T!
Benjamin and Archie were scheduled for their annual check-ups and were going anyway at this time of year.  Casper missed his annual in November so I added him to the check-up schedule and somehow he had never been micro-chipped, so he got one yesterday too.  Jimmy had some health issues when he first came to us and we decided not to micro-chip him at that time but wait until he was bigger and stronger.  Well yesterday was as good a time as any since his brothers were going, so I made an appointment for him also.  Off we went four cats in two carriers to see the fabulous and patient Dr. D.

Casper was of course an absolute angel, he is so gentle and easy and that even extends to the vet; he weighs 11lbs.  Benjamin was also a gem (perhaps terrified) and did not put up any fuss at all; he is a petite 8lbs.  Archie who is a very happy-go-lucky boy struggled a little when he had his temperature taken (I would too) and gave a few growls when he got his vaccination; weighs in at a robust 12lbs.  Little Jimmy at ten months old is 7lbs. and had the most disagreeable reaction to his micro-chip.  He hissed and growled and tried to bite the vet, he wriggled from my grasp and hid under my coat.  He was not happy but I promise you it was worse for me.  He is such a loving boy, I have NEVER seen him like that!  As a result the doctor could not get the chip injected and had to try again in "the back" where I'm sure a few technicians were enlisted to hold him steady.
Well thank goodness that is over for a while.  Jimmy will have his annual check in November but the other three are now done until next year...phew!  When we got home and opened the carriers they all bounded out simultaneously and much bathing ensued.  Everyone seemed to recover quickly however Casper talked about it all night and mummy had to have a big glass of wine!

Mancat Monday - Pretty mancats all in a row...

We bought a new blanket for the bed and the boys decided to give it their seal of approval...all at the same time!!! 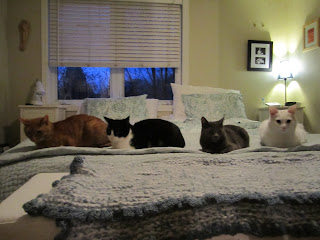 Usually it's the Peggy blankie that's on the bench that they all vie for for a turn on, but they abandoned it for the moment to check out the new addition. 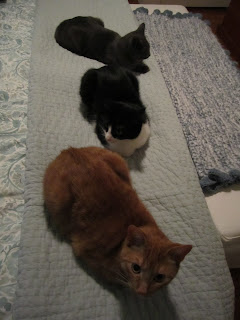 I suppose I should unfold it a little to give them a little more space to stretch out :-)
Posted by Cat 41 comments: