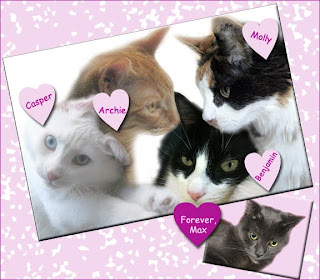 Below is my very first post, it was titled THE INTRODUCTIONS and tells you a little about me and the kitties.

Hello folks (if anyone is reading this) and welcome to my blog. I’m very new to the medium; in fact this is my inaugural posting.

I have four cats and that is the reason I have started this little project. They are the joy of my heart and the children I never had. Nothing makes me happier than talking about them, writing about them and taking pictures of them. I have bored my family and friends for so long that I thought it was time to branch out!

I live with a wonderful, handsome man who thinks that if cats make me happy then I should have as many as I want! WTF? However, I think that four might be my personal maximum regardless of the legal maximum (six in the City of Toronto in case you were wondering). I have been an animal lover and a cat person in particular ever since I can remember. To this day, the single-most fantastic present I ever received was a kitten for my eighth birthday…can you imagine! My parents are amazing non? It seems to be no coincidence that the first three letters of my name spell the word “cat” which has been my nickname from childhood.

My babies, in order of adoption are:

There was also Sweet Max, my little grey pearl who came after Casper and before Ben, but he developed the dreaded FIP and died before his first birthday.

All of my kitties were rescued. I got Molly (shelter name Shelby) from the OSPCA when she was about a year old. She had already birthed a litter of kittens (why don’t people spay and neuter?) and was found with them in a box; someone had just thrown her away. Adopting Molly was my first defiant act against a husband who did not want to have pets or children. My friend Pauline told me about Casper (previously named Yeti), a deaf darling who needed a home. He was born under the porch of her neighbour. Pauline had already found homes for the snow white boy and his identical sister Fluffy, however the people who had taken him when he was a kitten decided he was too rambunctious at nine months so they gave him back. I fell in love with his blue eyes the moment I saw him and we took him home immediately. We adopted nine month old Max (foster name Mystic) from the Toronto Cat Rescue as a companion for Casper. They were such immediate and inseparable friends it was simply tragic when he died. I will write his story one day on this blog. After Max, I did not want to get another cat but Casper was so upset and lonely, and Robert convinced me a new buddy for him was essential…enter Benjamin (shelter name Kennedy) five months old from Toronto Animal Services. I was firmly against adopting a youngster, since the disease that killed Max usually hits kittens less than one year or older cats more than ten years. But Ben was insistent that we notice him, working hard at the front of his cage, standing on his hind legs and sticking his paws through the bars trying to grab at us. When we picked him up he purred and did swimmy paws in the air. Who could resist, I certainly couldn’t! The last to join our family just a matter of weeks ago is a cheeky little ginger snap called Archie (shelter name Marshall), six months old also from TAS. He is the bravest and skinniest kitten I have ever seen. No slinking on his tummy or cowering under a bed for this little guy he is so bold it seems somewhat unnatural. Still stiff pawed and gangly he has made himself right at home.

Well there they are, my brood…three young boys and one old dame. Please watch this space for their bios, pictures and stories of them doing their clever cat things.

On November 30, 2010 we drove to the States to pick up Jimmy, who at the time was know as Ash, from a private animal rescuer who is a fellow blogger.  Ash was the very first Winnie's Wish adoption!  Here is the post from Ash's first birthday (about eight months later), we had renamed him Jimmy :-) 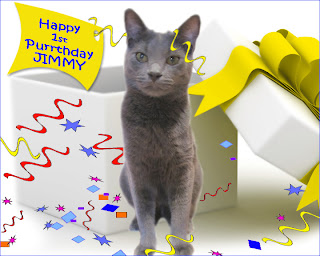 It is Jimmy’s first birthday today (or as near as I can figure after consulting with Chrystal), he is a mancat now and I wanted to share a little with all of you about just what a fantastic cat he is!  As most of you know, Robert and I adopted Jimmy from Chrystal’s private rescue and his name was Ash.  We drove almost 850kms (each way) across one province and three states to get him with the help of Chrystal and Amy from House of Cats each driving their separate legs of the journey to meet up with us. His start in life was not tops but a friend of Chrystal’s found him and whisked him away from his humble beginnings, along with his sister and a few puppies, to the cozy cathouse where he became a Winnie’s Wish kitty.  Chrystal’s kitties are raised on pure love (okay maybe some food too) and Jimmy is one of the happiest, most affectionate and well-adjusted cats that I know. 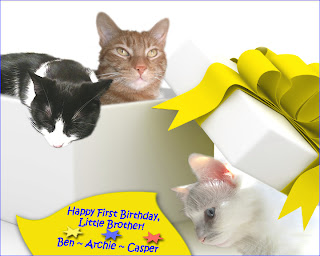 He is a cuddling, head butting, nose kissing, crook-of-the-arm sleeping bundle of joy who follows me everywhere, purrs up a storm and loves to have his tummy petted.   He is mad for toys and can make a game out of anything. A piece of paper is just as much fun as a catnip mousie, but even better is the cagey cotton swab, or prohibited ponytail holder... if he can get his paws on such celebrated kitty contraband (let's not even mention cufflinks or collar stays)!  He is crazy for his brothers too and will stalk, pounce, and wrestle with each one, not to mention cuddle, groom and snooze with them also.  He is a counter surfer and a make-up bag diver and a cheese monster.  He swaggers, gallops and sideways trots, he cannot jump as high as his brothers (yet?) and I believe this is of some frustration to him because he wants to tightrope walk the upstairs bannister too but believe me I'm fine with him staying on the floor - LOL!  He is a talker with a funny high-pitched trilling mew.  He is hilarious, earnest, silly, loving, clever, fun, brave, gentle, happy, mischievous and a delight to have around.  Robert always says about Jimmy “that cat has personality to spare!!!”  Jimmy is loved desperately and he rewards us EVERY day in so many ways for taking a chance and adopting a kitty we had never met before.  I thank my lucky stars that we decided to open our home to the little gray ball of fluff who grew into a sleek and wonderful mancat.


And the following year...

On November 5, 2011 we returned to the States and Chrystal's private rescue a second time to adopt a five month old house panther named Bagheera.  Here is the post announcing Bagheera's new name.

I have the loveliest childhood memories of my father reading bedtime stories to me and my favourite was Rudyard Kipling’s The Jungle Book (I loved Kenneth Grahame’s The Wind in the Willows too and always wanted to name my house Toad Hall).  Being a cat person for as long as I can remember, Bagheera was of course the character I cherished the most and wondered why we all couldn’t have large, black panthers as our loyal and wise guardians.  So you can well imagine that the moment I saw Bagheera, the all black kitten available for adoption on Chrystal’s blog, I was a goner!

The name Bagheera however does not exactly flow off the tongue and the other day when Robert called him Bags, I was convinced we had to change his name.  I immediately thought of Kipling, as an homage to the author who penned Bagheera and the fact that the name shortens nicely to Kip sold me on the idea.

Kipling also wrote The Cat Who Walked by Himself, a story about how animals became domesticated while the cat’s true heart remained untamed!  I have always believed that when a cat or kitten comes into our home they bring a little wildness into our lives.

As for Bagheera's second name, it was very difficult to see our all black kitty during the drive home from Ohio which was at nighttime.   Out of his carrier and moving around against the dark interior of our car, he was only a little slip of a moonshadow....

Therefore felines of all ages, I would like to present Kipling Moonshadow: aka Kip :-)