Hey kids, this is our 400th post and to celebrate I thought we'd flashback to when Ben was a baby.  This was about a year before I started my blog so you probably won't have seen these shots before...


There were so many pictures I could hardly choose, Casper and Ben were always stuck together like glue it was the cutest thing :-)


Whatever Casper did, Ben did.


They were world-class snugglers. 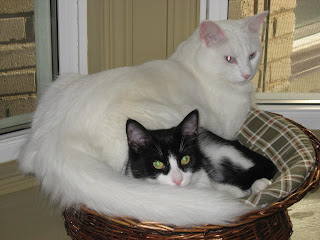 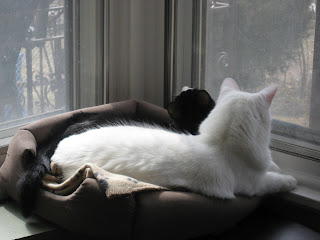 Casper looked after Ben so well.


Taught him about life. 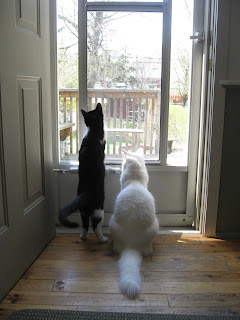 
It was a wonderful time 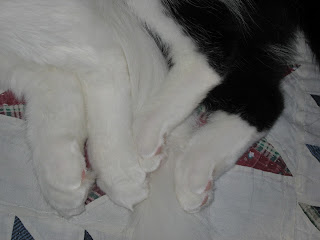 For both boys :-)
Posted by Cat

Concatulations on 400 posts! Love the photos of Capser and Ben - so cute!

What a beautiful post! We just loved all the photos! And congrats on #400!

They certainly have a special relationship and you;ve captured it beautifully in your photos. No wonder that Ben has grown up to be such a lovely gentle adult with having Casper to be his teacher and big brother.
Congratulations on 400 posts about your wonderful kitties!

We loved this post seeing Ben and Casper together. Casper was a great role model for Ben so no wonder he loves him so.
Luv Hannah and Lucy xx xx

Conga rats on your 400th post. That is terrific. We love those pictures of Casper and Ben. We especially like the one of the two of them in the bag together. They were so cute together. I remember when Molly was alive. Take care.

Oh those photos are SO SWEET. How cute that they are so bonded.

Congratulations on reaching the 400th post.
I loved the sequence of Ben and Casper shots ....I am sure with a little more narative it could be a wonderful childrens book. How handsome Prince Casper is and the perfect name for a white cat.xx

Congratulations on your 400th post!
And so many sweet photos to celebrate!
xo Catherine

Those photos just melt the heart, such a wonderful bond they share.

Cat this was such a special post for your 400th. Your captions under each picture were purrfect my eyes were a little moist at the love jumping off each picture. Casper is an amazing role model no wonder Ben loves him so.
Hugs Madi and Mom

Congratulations on 400th post! We always enjoy your blog. These pictures of Ben and Casper are so sweet. They synchronized many things :-)
We look forward to another wonderful 400 posts! Have a great weekend!!

I am almost jealous! How do you do that, keeping such a sweet happiness in your cats family? (And not to mention the dog - does this ring a bell to you?:-) )

I love tuxedos, I didn't bother about white cats, but for some years I have had a white cat, a feral one, but I can take him in my arms, he purrs, I talk to him, so that he knows he exists and means something to somebody, and I can't imagine life without a white cat now! Don't worry, he is neutered (he broke almost everything in the vet's cabinet when he woke up, but at least he will not leave kitties here and there).

Congratulations for the 400th post, I am always so happy, when I am having my first cup of coffee in the morning, to see that you posted something! You and other bloggers I follow every day and make my days so happy, or unhappy when something sad happens to our four-feet friends!

Smoochies to the kitties and the woofie,
looloo

Awww, that's so sweet :-) Our Mumsy even has the leaky eyes over Casper and Ben. We so glad you shared like that. Thank you. And concatulations on post 400! That's a bunch of good there.

That is such a sweet post! Thank you for sharing these pictures and memories of Ben and Casper. :)

Congratulations on your 400th Post. We love you guys, and wish you 400 more and beyond!

Memories of Eric and Flynn said...

Awwwww!!! You were so cute Ben! I'll be right over to snuggle with you!!!
Love & hugs,
Clemmie

We're just blown away by these pictures! These guys are truly soul brothers. So so lovely...

Aw, they are pretty sweet together! Congrats on 400 posts!

concats on 400 posts! great pictures of Ben and Casper! we like the one of them looking out the window together :)

Andrea and the Celestial Kitties said...

Congratulations on 400 posts!!
And I have to say AWWWWWWWWWW!! What a sweet pair of kitties! Followin' big brother! Too cute!

Such precious photos and precious memories. It makes us purr...what a wonderful bond they have,

Congratulation on your 400 posts! Love all your photo....both of you are so cute!

What a wonderful post of these two loving boys. I feel so warm and cozy reading it and enjoying the pictures, that I hate to leave! Congratulations on 400 posts, they are always such a pleasure.

How utterly adorable! It looks like Casper took Ben right under his wing (literally) and showed him how to do things, and took care of him. I'm sure they forged a bond for life.

That is just so sweet! And 400 posts! Concatulations!
Kisses
Nellie

Concats on 400! How sweet, we loved this post! Isn't it wonderful when an older cat mentors a kitten? Thanks for stopping by on our Gotcha Day and helping us celebrate.

Yay for 400 posts! And what a sweet one it is! Love the special relationship between Casper and Ben.