Thursday in the Garden 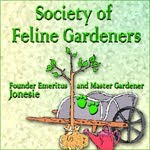 Hi All, while we were away it seem things really exploded in the garden.  We left brown grass and twig-like trees and when we returned a jungle had sprouted!!!  I thought I'd share a few pictures, but please remember that we are Townies, so our garden is very small!  Let's go out to the front... 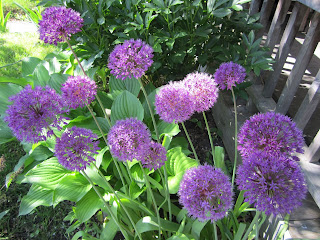 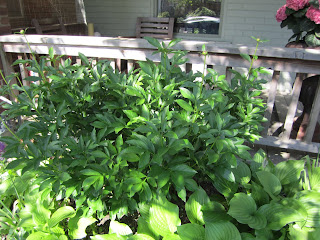 I planted Irises a two years ago and last year we only had leaves.  This handsome fella was the first one out and I'm happy to report that five more followed! 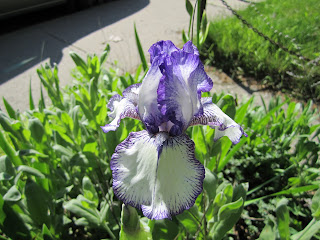 This poor little Weigelia doesn't get enough sun, but it managed to make some flowers :-) 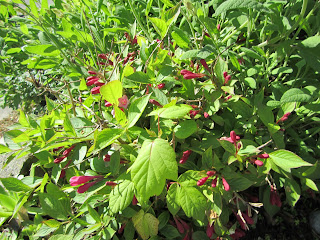 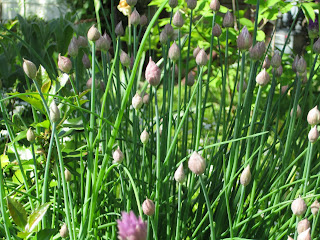 Our mystery tree which is very tall and reaches past the roof of the house.  We think it might be some kind of ornamental Cherry, it doesn't produce any fruit.  NOTE***  Thanks to Lizzie & 3 Kitties we now know this is an Ornamental Bradford Pear!  Yay :-) 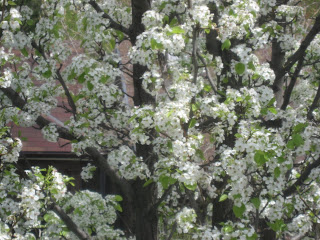 The last of the Daffs 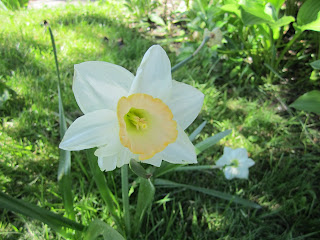 and finally, I bought this Hydrangea NINE weeks ago and it still looks fantastic!!!  Does anyone know if I plant it will it bloom again next year, seeing as it is a potted variety? 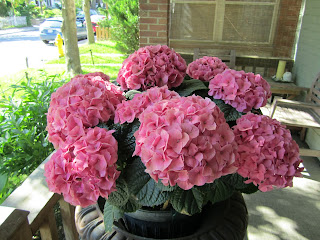 I hope you enjoyed the tour, next week we'll look at the back garden :-)
Posted by Cat

Email ThisBlogThis!Share to TwitterShare to FacebookShare to Pinterest
Labels: Cat's cats, Thursday in the Garden

Your blooms are lovely! Plus you know their names, which our mom mostly doesn't. LOL.

Hey, even we "townies" can have great gardens. And most city backyards certainly are far larger than our townhouse back space, so we think you're doing really well!

What super pictures from your garden! Everything is so pretty.

We planted a hydrangea in a pot on the deck after having it inside at first and it did bloom, though not as well as before. Give it a try! You may need to protect it over the winter, though.

Boy! Yous must have 2 green thumbs! Unlike my Mommy!
Glad things growed so big while yous was gone.
Kisses
Nellie

What a pretty garden
Luv Hannah and Lucy xx xx

That is a great garden! They flowers are very pretty - even the chive flowers! We don't know a lot about gardening so we don't know if the hydrangea will keep going if you plant it. Our moms neighbors had them in their garden but we think that is where they started out.

Those sure are pretty, I can almost whiff them from here!

Hi Guyz ,,,
You would nefur know that you all are "Townies" your Garden iz Beautiful~ ^..^
Mom LOVES the Pretty Iris ;))
Not knowing da name of da Hydrangea?? we would guess it is da kind that stayz in da pot and house in Winter ??
Maybe your mom can google it ^..^
Your Garden iz Lovely Boyz ^..^
Purrrz ~ Ana

Love your flowers! Hydrangeas prefer acidic soil, so if you plant it outdoors, make sure to add some used coffee grounds or purchase fertilizers meant for acidic plants.

Your garden is so beautiful with colour!!! Lots of love, Debbie & Holly

ohhhh we found you thru Kirby's blog and wow we likes your flowers. Our chives is just about to bust open and also our peonies. We have not had a good spring here on the west coast so we are behind in blooming!

We just did a veggie rescue and managed to save some things but not all. You can check it out on our post.

Youe garden is blooming! Isn't it nice when nature does as it will beautifully even without our guidance :)
We have flowers in bloom too and as fellow townies we think it's great when others create beauty and gardens too!
the critters in The Cottage

Hi Cat.....your garden put on a spectacular show to welcome you home!!! You might be a townie but you have things planted in just the right locations.
Hugs Madi and Mom

You have a beautiful urban garden!

The hydrangeas you get at a florist are usually for inside use only--warm zone varieties, I think. If you get one from a nursery be sure to get one that's hardy enought for your winter. Even then you might want to protect it by wrapping it in burlap.

I think your tree is an ornamental Bradford pear.

Oh Lizzie (& 3 Kitties) you are fantastic!!! Nobody could figure out what this tree was - LOL!!! I just googled Bradford Pear images and indeed you are correct. Thank you :-)

Your blooms are looking fantatic
all so beautiful :-)
I have to many Giant Allum
we say bieslook ;)

Your garden does looks really terrific. We love pretty flowers. WE have a Bradford Pear tree here too. They are so pretty when they bloom. Have yourselves a fantastic day.

I think your garden is very lovely! Lovely colors.

That is a lot of blooms!

It doesn't matter how small your garden is -- it's what you do with it! LOL! And you have done magnificently, with the help of your four boys, I imagine.

I have the same weigela with red flowers. I wish they lasted long than just a month or so, though.

And I love the purples -- one of my favourite flower colours.

Your garden is just beautiful and I for one believe small yard is just as gorgeous as a big one with less work!
:::heheheeh:::
Your hydrangea will bloom again for you next year. IT is really beautiful. Mom bought a white one this year and she decided to keep it in a pot. She loves the vintage feel and she paired it with some ivy.

Thank you for your kind thoughts and purrs for my Daddy!
purrs
>^,,^<
♥Abby♥

Beautiful garden! We recognized the Bradford Pear :) we have one in our back yard - a favorite of our mom's cause the flowers in spring and for us cause the little fruits bring the birds later in summer and fall!

Your flowers are so pretty!! We love hydrangeas. We don't have any in our garden, but our neighbor does and we love seeing the big blooms.

We have an ornamental Manchurian Pear in our front yard - but it's all bare branches at the moment, on account of it being winter here.

We adore hydrangeas and they are big bushes in our yard so we purr "go for it" and I bet with your green paws it will do fantastic.

We finally figured out that if we switch to Google Chrome as our browser it fixed our problems with commenting. Yay!!!

We have a tree just like it in our front yard so it was an easy identification.

Love your boys and your blog!

Wow, your garden looks so beautiful! How nice to come home to all those wonderful blooms. :)

Your flowers are beautiful!! What a cheerful garden you have! I especially love your hydrangea - they got such a pretty color!