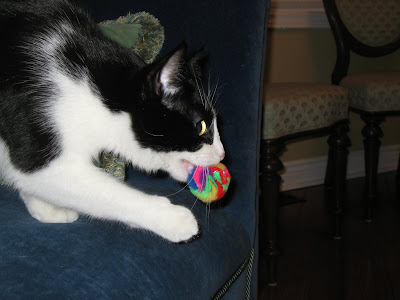 The nice folks over at the New Tuxedo Gang Hideout posted Ben’s picture today on their blog and welcomed him into their club. In light of this, Ben thought I should write a little about how he came to live with us…

We adopted Ben from Toronto Animal Services on Friday, March 13, 2009, and it was a very lucky day for us! His age was unknown but the shelter staff thought he was around five months old. Three evenings in a row we went back to the shelter and basically ignored him because we were looking for an older cat as a companion for Casper. Ben (or Kennedy as he was known then) would reach his paws outside his cage and try to catch us while dancing around on his hind legs and we thought isn’t he sweet as we walked on by and went to look at other cats. Finally Robert took him out and held him towards me saying “what about this guy”? I cradled him in my arms and he lay contentedly on his back and made happy paws in the air. Well I was hooked and we took him home immediately. After a year and four months together I constantly marvel at what a fantastic cat Ben is and how he knew that we were the right people for him and didn’t give up trying to tell us so!

And the moral of the story is: when the universe tries to tell you something, like putting a kitty in your path who is basically jumping up and down saying Pick Me, Pick Me, it’s a sign (duh) so pay attention and you will be joyfully rewarded EVERY SINGLE DAY!
Posted by Cat

LOL! What a wonderful story about how Ben came to be part of your family.

That's pretty much been the case for me, the cats choose me, not the other way around.

How true that the right cat will just get you every time! When I went to look for a cat last time as I entered the cattery Hannah just looked me straight in the eye and that was that and so I have to adopt her friend Lucy too. They are wonderful.

That is a wonderful story and everyone could learn a lot from Ben's gotcha story!!!

Welcome Ben to the Tuxedo Gang!! We just loved the story of your Gotcha Day!!
Howdy from Samantha

Such a great adoption story! Our Mom totally agrees with your theory about kitties choosing you!

Ben is adorable and that's a great gotcha story!...Sukki's story is much the same=I declined an offer to take her from a friend and then decided to listen to the universe and she has been the best kitty ever=very loving, playful, sweet, social=I can't imagine my life without her!

That is a lovely story about how much Ben wanted to come home with you. He must be quite a sweetie.

Ben is a great cat!! You were lucky to have found each other!!

Mum had a similar experience. She walked into a rescue and a black cat stood on her hind legs and started meowing loudly when she saw mum,. The woman at the rescue said "oh good, you've found your cat". She thought that mum was the actual owner of the sweet stray. Mum had never seen the cat before but she had, indeed, found HER cat! After the forms were completed by mum, the black cat came home to her true family.

What a wonderful story about Ben! We have a situation here where a tuxedo kitty has lost it's home for the second time. The bad people down the street moved and left him. The people before them moved and left him. He is always sitting on our front porch now which is making mom think she might just have to get him and take him to the vet to get his shots, etc. He really looks like he likes it here! Lots of love, Debbie and Holly

Hi Ben, concats on gettin' in the Tuxedo Club! You have a great gotcha story. Never give up!

Thus proving, once again, that Cats are smarter than People.

Ben hit the jackpot when he found yoo to be his forever momma. Welcome to the Tuxie club too.

Nice to meet you all!
Your new friend,
Sly